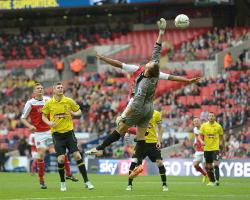 Fleetwood Town 1-0 Gillingham: Match Report - view commentary, squad, and statistics of the game as it happened.Debutant nets win for Cod ArmyTom Hitchock's early goal was enough to see Fleetwood defeat Gillingham 1-0 at Highbury.The on-loan MK Dons strikers could not have asked for a better start to his stint with the Cod Army

Hitchock only arrived on Friday afternoon but he was on the scoresheet within three minutes.Stephen Bywater's sloppy punch did not make it out of the Gills box, and Hitchcock struck with a composed finish to drive the ball home.Fleetwood could have added to their tally

Stephen Dobbie almost set up Gareth Evans but the Town winger's back-post shot scuffed wide.But poor defending almost allowed the visitors back into the game before the break

Chris Maxwell scrambled to claim the ball after a bout of pinball during which Danny Kedwell sent a deflected effort spinning goalward.The second half was a far less one-sided affair, with Gillingham's pressing game taking its toll on the home side.However, Fleetwood could have doubled their lead when Dobbie released Hitchcock down the right, but the young forward took two touches and was unable to test the goalkeeper.Defender Nathan Pond then went close for the home side, but his diving header went narrowly wide.Fleetwood went closer still thanks to another howler from Bywater, the keeper spilling a Josh Morris shot at the feet of Dobbie but neither he nor Hitchcock were able to bundle the ball home.Leon Legge served up a late scare for the home side when his 18-yard blast flew narrowly wide after a scramble in the area